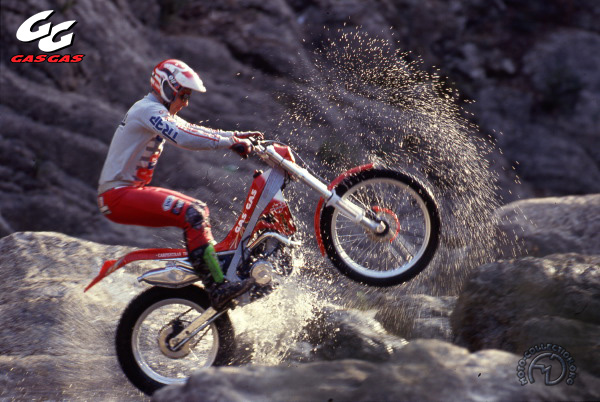 Though the 1980s had seen the disappearance of Bultaco and Ossa, the beginning of the 1990s seems likely to herald the rebirth of the Spanish trials bike industry. In 1983, a dynamic new manufacturer named Gas-Gas appear on the scene.

Spain in the early 1990s was undergoing an economic boom, in which good fortune awaited those who reached for it. That was certainly the case with Senor Paxau (pronounced "Pachao"), a famous enthusiast of trials bikes in Catalonia. This specialist had assisted in the design and production of the JCM (a make of French trials bike which has since all but vanished from the scene).

Paxau's new marque took the name "GasGas". In 1989, it launched a successful model called the "Halley." Two years later this "leisure/trials" machine was followed by the Delta GT25, which had all the expected technological features - liquid cooling, inverted fork, perimeter frame. In 1992 GasGas unveiled the Contact GT25, a much improved version of the previous model. Developed by the champions, modern trials machines certainly have performance. But the Gas-Gas, while it's certainly on target in terms of competitiveness, represents a rare and successful compromise, for it is an enjoyable, efficient machine with good performance, whose advantages can be exploited by all levels of trials riders.

Between the 1989 "Halley" and the Contact GT25 of 1992, the young Catalan company GasGas has progressed with fantastic speed.