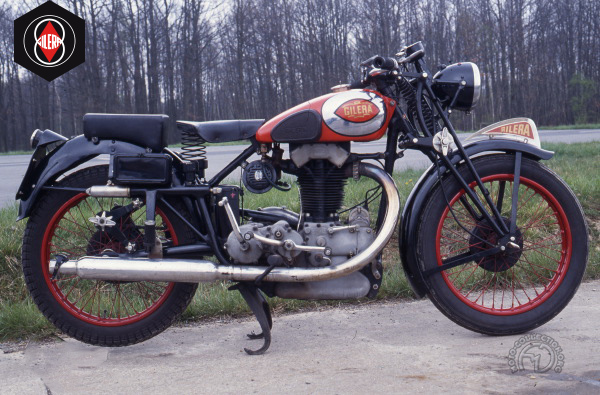 In 1938, Gilera made a brilliant showing on the track with its four-cylinder Rondine. But the marque had not forgotten its singles and entrusted engineer Giuseppe Salmaggi with the design of the 500 Saturno. It was derived from the 1935 500 VT, known as the "Quattro Buloni," from the number of studs fixing the cylinder to the crankcase.

Start of the Line

This 500, with its overhead-valves and single exhaust, incorporated the main characteristics of the future Saturno. At its heart was a semi-unit-construction engine with duplex chain primary transmission and with four speeds selected by a right-hand pedal.

The oil reservoir was cast integrally with the lower crankcase, and there was a choice of frames. One had a rigid rear end; the other was fitted with the famous Gilera swing arm suspension in which levers acted against twin horizontal springs mounted beneath the saddle. The VT developed rapidly, becoming known as the "Otto Buloni" because the cylinder was held down by eight studs. The VTE "Grand Sport" appeared in 1939. It was modified in many details; the most noticeable was the increased size of the fins on the cylinder casting. This enclosed the vertical tube containing the pushrods and the oil pipes. The suspension was lightened, ignition was by magneto and a rev-counter was optional. The Gran Sport distinguished itself in national races. The same year, it was joined by the 93 mph "Special," built according to the Sport Formula, with a new gearbox.

The extremely modern "Otto Buloni" enjoyed many sport successes, representing the start of a motorcycling legend.