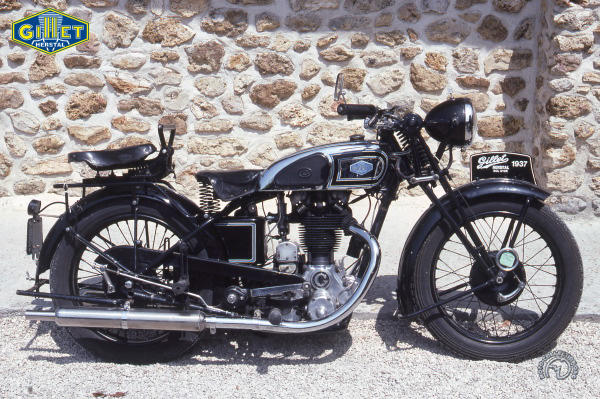 In 1936, a Gillet-Herstal won the French Bol d'Or for the third time. To celebrate this triple victory in France's premier motorcycle endurance race, the Herstal-lez-LiĂ¨ge company decided Â– as they had once before Â– to give the race's name to their new model.

The new Gillet had absolutely nothing in common with the victorious Bol d'Or racer, but was a civilian version of a military model developed for the Belgian Army in 1936.

Two Exhausts for the Price of One

Following the traditional layout of the marque's four-strokes, it had a four-speed gearbox built in unit with an engine available in three different types Â– "L" (side-valve), "ST" (overhead-valve standard) and "Bol d'Or" (sports) Â– and two displacements (500 or 600cc). The gearbox incorporated a new selector system, and even the standard version received a shift pedal. The starting handle was shifted to the right side. The crankshaft retained the extra roller bearing on the oil-pump side, and the fork damping could be adjusted by a single knurled knob. The cylinder head, also new, had hairpin valve springs and could be fitted with either one or two exhaust pipes to choice, for the same price. The rockers operated the valves though intermediate lifters. This motorcycle was chosen by the Belgian authorities to equip the special police responsible for keeping order on the highways, who escorted the Belgian Government during its retreat from the Germans in 1940.

This 500 Bol d'Or from 1937 took part in the retreat of the Belgian government in 1940, but only got as far as the north of France, where it was machine-gunned by the German Luftwaffe.