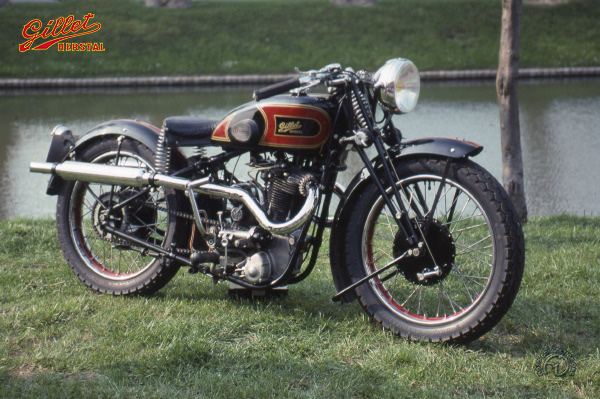 At the end of 1930, alongside its range of vertical singles Â– characterized by the letter "D" (for Droit-"upright") Â– the Ateliers Gillet, of Herstal (LiĂ¨ge), launched a new series of inclined singles. These included 350 and 400cc side-valves and an overhead-valve 350. A 500cc range on the same lines appeared in 1934 in side-valve, ohv, and racing versions; there was also a side-valve 600 for the Belgian Army.

The 500 overhead-valve engine had, in fact, first seen the light of day in a 1932 grass-track racer as the top end of a 1930 500cc Bol d'Or engine mounted on a 350 crankcase. Known as the "Lightweight 500", it was developed into the 500 GP34, which in turn fathered the 500 HG25 (pictured). The four-speed "box" was optional on all models except the Racing HG26, which had close-ratio gears and could exceed 90 mph. Also optional was a foot-change mounted alongside the engine, with the tiresome habit of shearing off if the bike fell over!

Champion in a New Sport

The inclined singles re-emerged in 1946, fitted with telescopic forks, though that marked the end of the production run; they were replaced by more modern models, notably the new 250 "Superconfort" range. However, the inclined singles distinguished themselves in the new sport of motocross. They gained an impressive victory at Montreuil (France), but were particularly successful in their homeland where Victor Goovaerts won the 1946 and 1948 Belgian Championships riding a Gillet-Herstal.