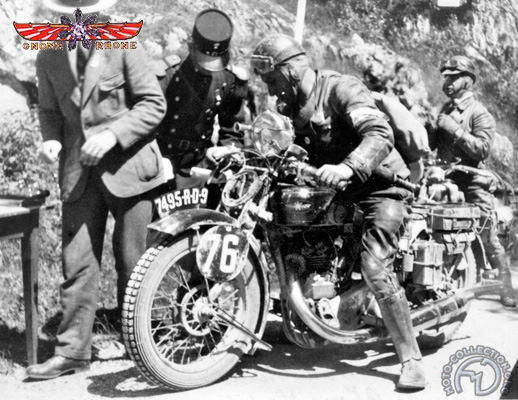 Launched at the beginning of 1928, the Gnome & RhĂŽne D4 was definitely the most successful of the all-French 500cc sports bikes built between the two world wars. It succeeded the D2, and corrected the shortcomings of its predecessor's frame design. It was last listed in 1932, and was replaced at the Paris Show by the 500cc CV2 flat-twin.

"From the finest aeroengine to the finest motorcycle" boasted the description of the D4 in the 1929 Gnome & RhĂŽne catalogue, in which the noted engine manufacturer lost no opportunity to promote its aeronautical expertise. That first D4, however, was to disappoint sporting riders, for its performance was actually worse than the D2 it replaced. While its road-holding represented real progress, the D4 was heavier than the D2 and could only reach 73 mph on gasoline or 79 mph on a mixture of gasoline and benzol. Works riders Naas and Bernard collected an

impressive number of trophies with the D4, particularly in the major rallies. The D4 won

The D4 was a typical sports 500cc of the early 1930s, with a big-bore tailpipe ending in a "Brooklands Can"-type silencer with a fishtail exhaust. Sold at 6750 Francs without lighting and 7500 Francs with, the D4 was available with an optional clock and tachometer.

Fred S. Lipman, famous motorcycle journalist of the time and later creator of the Lip famous watches, thought the D4 was "comparable with the English A]S and Norton."