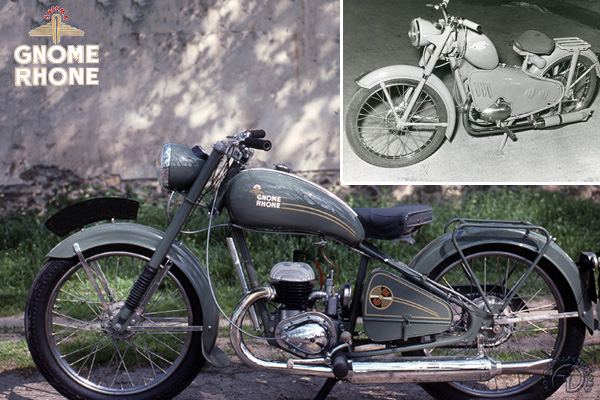 Europe has always had a soft spot for smallcapacity utility motorcycles, well-suited to the generally high rates of gas taxes. Typical was the little Gnome & RhĂŽne R4 range, developed from the 98cc Model R of 1941.

In its standard black livery, the R4 was a mournful-looking machine, whose design was as unadventurous as the choice of color. It had a simple cradle frame, and when rear suspension at last became available, on the 1953 R4C, it was a simple plunger layout with a grudging 2 inch travel. Moreover, Gnome & RhĂŽne continued to produce the R4B with a rigid rear end.

The three-speed gearbox had a left-foot selector pedal (contrary to normal French practice, though it was common across the border in Germany) and was so compact that Gnome & RhĂŽne had to design an entirely new transmission for its 125, 175 and 200cc four-speeders. An advantage was that the R4 engine developed 6 hp (most of its 125cc French contemporaries produced only 4.5 hp), giving a 53 mph top speed. Later versions of the H4 were rather more attractive: the R4D of 1956 fina lly gained swing arm rear suspension, an upgraded engine and a twist grip gear shift. In 1957 came the R4S, strongly influenced by the small sporting Italian machines, with a racing red paint job, dual seat, lowered handlebars and 16 inch wheels. But it was too late to save the marque: Gnome & RhĂŽne production finally staggered to a halt in 1960.

The standard finish of the Gnome & RhĂŽne R4B was black enamel; the olive green color scheme of this restored example makes it tess of a Plain]ane.