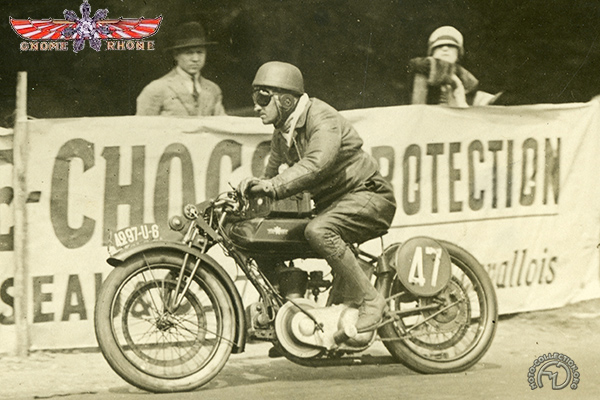 From plane engines to motorbikes

In 1919, the plane engine manufacturers Gnome & RhĂ´ne decided to diversify into motorcycle manufacturing. They bought the license to build the advanced ABC 400cc flat-twin from one of their former wartime customers, the British firm Sopwith Aviation, whose Camel scouts were powered by Gnome rotary engines. But the ABC proved costly to build and Gnome & RhĂ´ne decided to build their own power unit.

That first Gnome & RhĂ´ne engine, a clean modern 500 side-valve single, bore more than a passing resemblance to the British JAP engine. Designed by an engineer named Bartlett, it had a cast-iron fixed-head cylinder, a single camshaft and hinged valve lifters. Ignition was by a magneto with manual advance and the tailpipe just had its ends clenched together and liberally drilled to form the most basic kind of muffler. Scarred by the experience of the complex and unreliable ABC, Gnome opted for simplicity.

At the 1923 Paris Salon, Gnome & RhĂ´ne unveiled its new Type D "Grand Sport," with a strengthened connecting rod assembly. Thecompany's own gearbox was a copy of the British Burman unit and final drive was by chain. The "D" could reach the magic 60 mph mark - not bad for its day- and to increase the comfort of the rigid rear end, Gnome offered balloon tires and friction dampers as an option. In 1928, the Model D, whose dependability had created a sound reputation for the marque, was replaced by the new side-valve D3.

This typical flat-tank sportster of the 1920s was remarkably well-equipped: It had a luggage carrier, front and rear drum brakes and a friction steering damper.