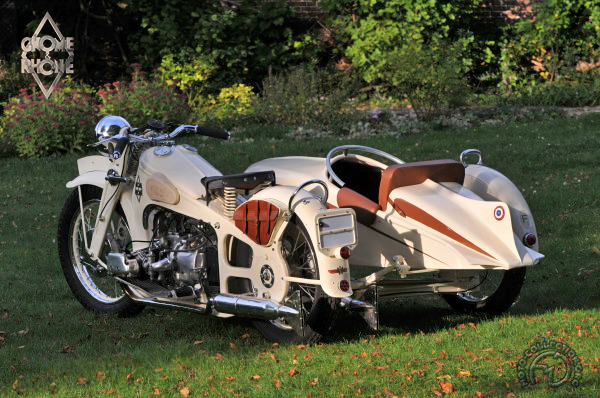 After WWI, France produced very few largedisplacement bikes - and most of those were fairly marginal affairs. The sole exceptions were the 750 and 1000 Rene Gillet and the 750 X Gnome & RhĂ´ne. At the time that Gnome launched its 750, it was France's finest bike.

Gnome & RhĂ´ne's first motorcycle of 1924 was a license-built ABC ohv flat twin, a machine so far ahead of its time and so costly to build that Gnome was forced to turn to simple, economical single-cylinder machines. A flat-twin did not reappear in the catalogue until the 1930 Paris Salon when the shaftdrive V2, with a side-valve engine, was launched. It was followed two years later by the 81 mph overhead-valve CV2, one of France's fastest bikes of its day.

All that was needed by Gnome and Rhone was to be known as France's finest sidecar machine. The 750 X, unveiled at the Paris Salon in October 1935, filled that role to perfection. Powerful due to its engine size, with four speeds and shaft drive, it hauled a Bernardet "Sport" sidecar with a chassis custom-built for the 750 X, at an easy 75 mph, taking many records. Rapid and reliable, the 750 X broke 20 world records in September and October 1937, including 24 hours at 84.86 mph. Two years later, between April and July 1939, it reasserted its superiority by setting 24 new world records, including 50,000 kilometers covered in 19 days at an average of 67.98 mph.

In its superb ivory cellulose finish, this 750 X is exactly as described in the luxurious Gnome & RhĂ´ne catalogue issued in 1937.