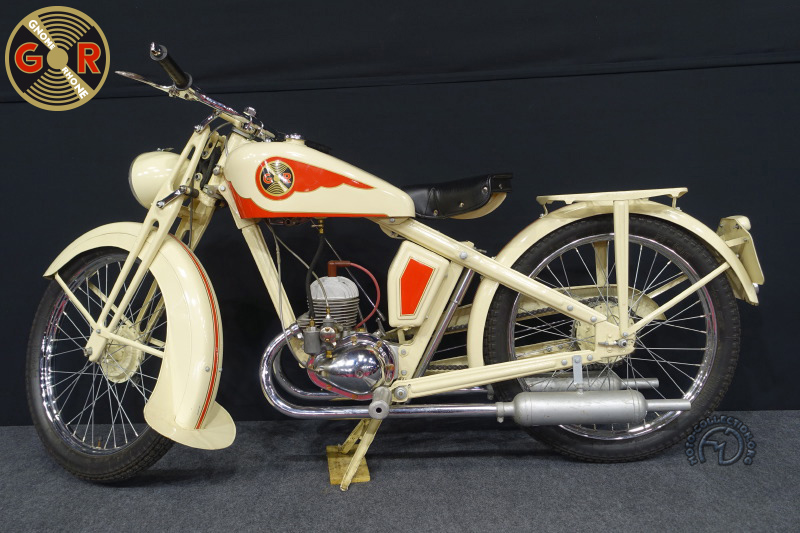 Although most French motorcycle firms had jumped right into the vital 98cc lightweight sector in the early 1930s, it was another ten years before Gnome & Rhone entered it.

Gnome & Rh├┤ne had virtually completely revised its range in the 1930s. It was the era of the pressed-steel frame and the unit-constructed engine, which saw the launch in 1930 of the V2, soon followed by the CV2 and AX2, flat-twins of 500, 750 and 800cc. In the following years, this rejuvenating treatment was applied to the Junior and Major (150 and 350cc side-valves), Super-Major (350 overhead-valve) and the D5A (500 sidevalve), built for the army like the AX2.

Child of the Occupation

But after the nazis occupied France in 1940, Gnome & Rh├┤ne was forced to work for the German army, which only authorized the production of an ultra-lightweight machine - the 100 R was developed. Like its discontinued siblings, it had a pressed-steel frame and girder forks with eirnan rubber springs. The powertrain was a compact engine, built in unit with a three-speed transmission ┬¢ in contrast to competing marques, which had separate construction of engine and gearbox. But in other respects, it followed the technical trends of the time, with a deflector-top pi ton, twin exhausts and a carburetor mounted on the side of the cylinder. Various modifications led to the Rl. After 1000 examples of the R and R1 had been built, Gnome & Rh one developed the 125cc R2, R3 and R4, which continued production until 1953.

Though the 100 R shared the pressed-steel frame of the larger 250 to 800cc models of the day, its successors had a new tubular frame.