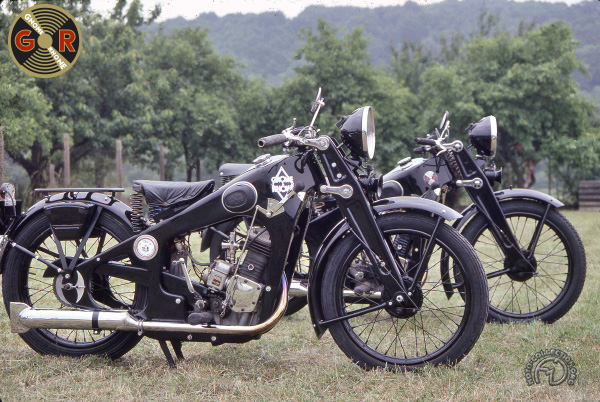 Famed makers of rotary airplane engines during the Great War, Gnome & RhĂŽne turned to motorcycle manufacture in 1919, building the 398cc Bradshaw motorcycle and subsequently the ABC flat-twin under license. Both bikes were designed by the British engineer Granville Bradshaw.

Motorcycle production in Gnome & RhĂŽne's Paris factory was supervised by an Englishman, Captain Bartlett, who also rode the firm's motorcycles in competition. As early as 1930, Gnome & RhĂŽne followed the lead of BMW by using a pressed-steel frame, becoming the leading French supporter of this technology. Their first steel-framed machine was the 500 V2, and by 1935 the entire Gnome & RhĂŽne range - from the luxurious X 750 to the popular 250 Junior was following the V2's lead.

Off to a Flying Start

The 250 Junior was launched in 1933. In 1934, it covered the distance from Paris to Bordeaux and back in just 20 hours, 22 minutes. According to the manufacturers, the Gnome & RhĂŽne pressed steel frame "put an end to the anachronistic tubular steel frame ... a motorcycle must be designed according to the same formula and in the same spirit as its big sister, the automobile ... the pressed steel chassis is easier to make yet more robust since it needs neither welding nor tricky assembly." However, they conveniently overlooked the fact that pressed steel frames also called for extra funds to pay for the heavy investment in new machine tools.

Two juniors, two badges: the traditional Gnome & RhĂŽne badge was diamond-shaped but the quartered red and white circle, used at the end of 1936, is a symbolic airscrew recalling the company's links with the aircraft industry.