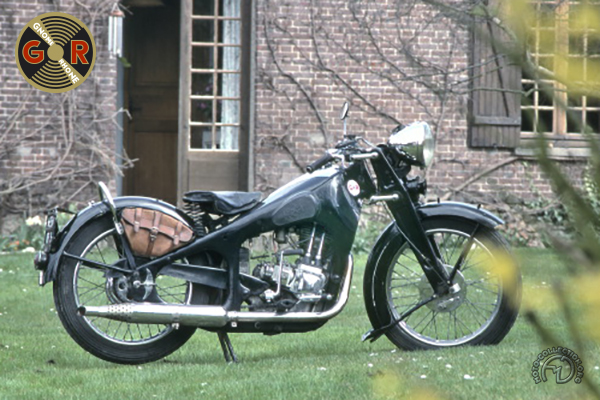 A keen user of tubular frames and the engine with a separate gearbox layout, Gnome & RhĂ´ne displayed a change of mind at the 1929 Paris Salon with the V2, a unit constructed 500cc flat-twin with a pressed-steel frame. It was the star of the show.

he side-valve V2 formed the basis for theohv 500cc CV2, 750cc X and 800cc side-valve AX2 (built for the army), a range going from flagship models to utility side-valve bikes. In 1934, Gnome & Rhone marketed the Junior, a side-valve 250 with a unit-constructed engine and pressed-steel frame and forks, in the same style as its larger siblings.

In 1936, the series was widened by the 350cc side-valve Major and ohv Super Major. The 500cc D5, a civilian version of the side-valve D5A military bike, came in 1938. All these bikes were singles, but there were differences in the frames according to their displacements. The 98cc R of 1941 was designed along the same lines. As for the Super Major, it looked good with its chromed bullet-shaped headlamp, its valanced front mudguard, its streamlined muffler and its rear lifting handle, which replaced the luggage grid and underscored the bike's sporty nature. The 750's only sour note was sounded by the shift lever for the fourspeed transmission. It was mounted on the tank but could be replaced by a foot-selector, which was optional in 1936 but unavailable on the 250 and 350cc side-valves.

If the extremes of the range- the 250 junior and the 500/750 flat-twins- were successful, the 350 and 500cc singles did not enjoy the same good fortune; they were worthy but dull!