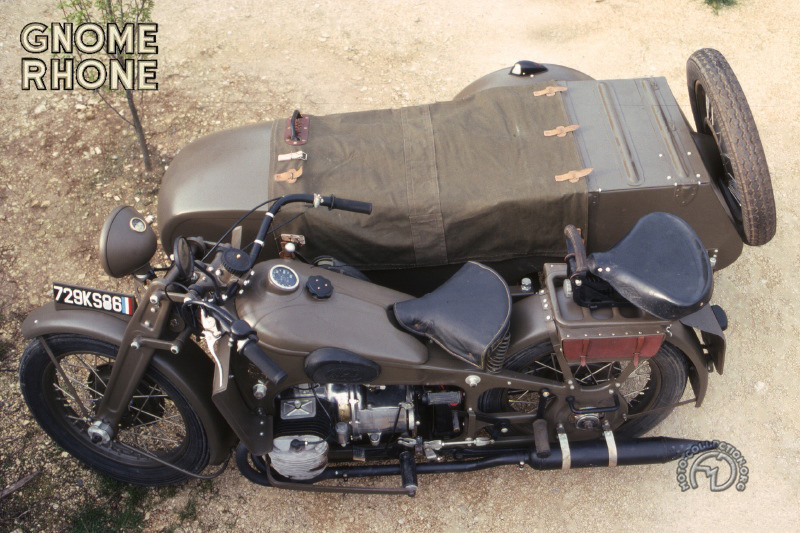 As World War II loomed, every European nation was developing military motorcycle combinations with powered sidecar wheels. Belgium started the trend with their FN and Sarolea outfits; then came the Germans with their Zundapp and BMW Afrika Korps or "Type Russia," the English with their Norton "Big Four," the Italians with their Gilera Marte - and the French with the Gnome & RhĂŽne 800 AX 2, a heavy, crude and virtually indestructible machine that had all the potential of its foreign rivals.

The Test of Paris-Dakar

Launched in 1936, the AX 2 went into production in 1937; there were several versions. The potential of the Gnome & RhĂŽne was demonstrated in 1939, when an AX 2 successfully traveled a route that was to become an off-road legend - Paris-Dakar. Though the AX 2 was not really a true off-road machine, it had the advantage over its German rivals of having an ample ground clearance, which enabled it to get through where even a jeep might flnd difficultiesprovided that its rider was an expert, since the sidecar's principal fault was that only an experienced rider could get the best out of it.

Efficient without being outstanding in any particular respect, the Gnome & RhĂŽne AX 2 was one of the best-matched military sidecar outfits. It's a pity it was also the last Â·'big banger" from this famous French marque, which is nowadays known as "SNECMA" and has returned to its roots, the manufacture of airplane engines.

Brakes: drum (from and rear)

The wheel of the Bernardet sidecar fitted to this Gnome & RhĂŽne military motor-cycle features a declutching mechanism.