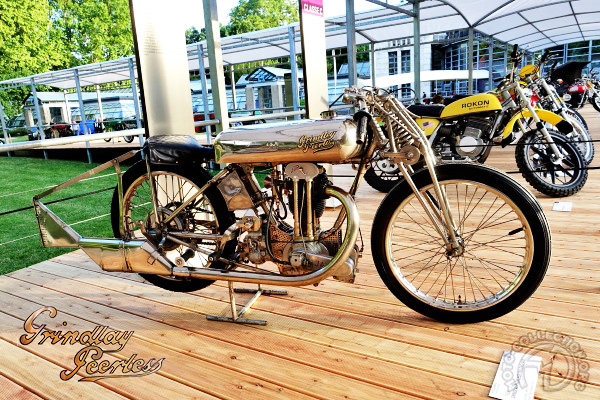 Between 1907 and 1939, a banked concrete track outside London Â– the inspiration for the Indianapolis track Â– was the focus of racing and record-breaking in Britain. In 1928, C.W.G. Lacey, famed for the immaculate preparation of his racing bikes, became the first English motorcyclist to reach 100 mph, riding his stunning nickel-plated 500cc Grindlay-Peerless-JAP, a proud product of a tiny factory in Coventry.

Lacey was not, however, the first Briton to maintain the magic "ton" for an hour. In 1925, Claude Temple had been the first past this barrier with his 998cc OEC-Temple-JAP Â– but that was at Montlhéry, France, and to a true-born Brit like Bill Lacey, a record set on foreign soil didn't really count!

Lacey's achievement was all the more remarkable since, while Montlhéry was nearly new, the track at Brooklands had never recovered from its wartime use as a storage depot and was of a legendary unevenness, particularly to the riders of rigid-framed bikes. To celebrate Lacey's achievement, Grindlay-Peerless produced six official replicas of the record-breaking bike. All were ridden by Bill Lacey and certified to have exceeded 100 mph at Brooklands, though their engines didn't share all the secrets of Lacey's meticulously-prepared "JOR" JAP. It was probably just as well, since during the record run, it had consumed the alcohol fuel stored in its massive 9 gallon tank at the rate of one gallon every 11 miles!

This unique machine, restored from a wreck, is today a star exhibit in the Birmingham National Motorcycle Museum.