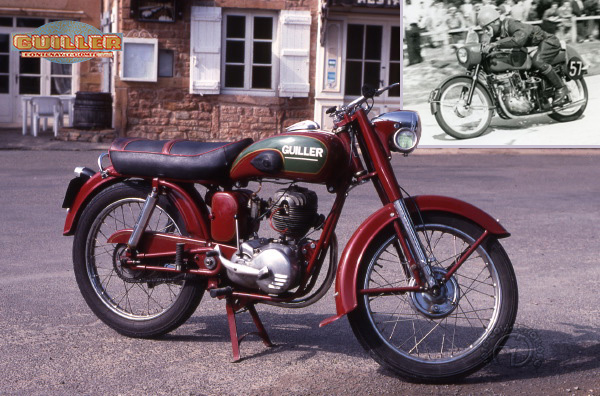 While France's major manufacturers leaned towards the mass production of often very dull machinery, many minor marques were innovators in frame design. That was certainly true of Guiller, active at Fontenay-le-Comte (Vendée), in the west of France, between 1949 and 1956.

Regarded as one of the nation's finest makes, Guiller produced a variety of models from 50cc cyclemotors and scooters built under Italian SIM license to 250cc ohv AMC-engined four-strokes. Also used were Aubier Dunne, Ydral and VAP engines. The 175 Sport of 1952 was innovative for its day with its beautifully made swing arm rear suspension Â– at a time when plunger (or even rigid) rear ends were commonplace in this size of machine Â– which ran in heavy roller bearings, replaced on later versions by more conventional bronze bushes. Neither this rear end nor the Grazzini adjustable telescopic front forks had hydraulic damping.

To power the Sport, Guiller had chosen one of the finest engine/gearbox units made in France, the all-light-alloy AMC, which, in its sports version, developed 10 hp on a compression ratio of 8:1 against the 8.5 hp at 8500 rpm of the standard version, whose compression ratio was only 7.3:1. Beautifully built and well-equipped, the Guiller offered little more performance than the mass-produced products of Motobécane and Peugeot, but it had far better road manners and a notably livelier engine Â– and cost 30 percent more.

Lithe and lively, the AMC-powered Guiller 175 G 90 S had excellent roadholding and was good for 65 mph.