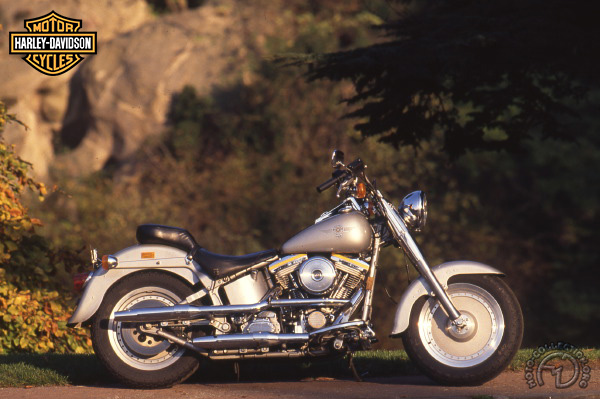 Harley-Davidson has responded energetically to meet the growing demand, particularly from Europe, for its cycles with new superbikes still based on its immortal V-twin engine. Massive, elegant, and stripped to the bare essentials, the latest Fat Boy seems to have ridden straight out of the Fifties. This Fat Boy, however, represents an entirely new concept. Impressive but still exceptionally smooth, the power unit has become more reliable. The frame, though it looks exactly like the old, rigid Harley set-up, conceals twin shock absorbers beneath its gearbox. The height of innovation is the use of a cogged belt for the final drive.

What has become known as the Ā‘custom bikeĀ’ keeps getting more and more popular every day. The big Harleys and their Japanese counterparts are ushering in a new era of cycling, offering a lifestyle in which sheer performance has been replaced by the more relaxed pleasures of tooling along on a slick machine with a monster engine. But the bikes themselves are not always so subtle! Listening to the way one of these things roars away from a stoplight will tell you all you need to know about why riding a Harley gets you noticed!

With its timeless good looks, the Fat Boy is the quintessential Harley-Davidson Ā– and the best bike of its kind currently in production.