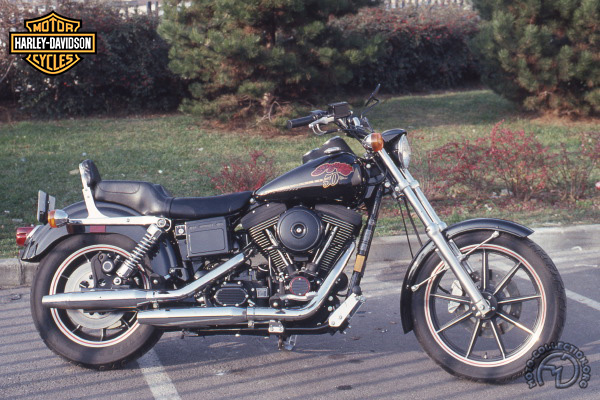 What is the secret of the Harley-Davidson legend? The "Milwaukee Hog" is not the most powerful bike on the market, nor the fastest nor yet the best overall performer. But it is endowed with an extraordinary aura and sales continue to climb on both sides of the Atlantic.

For years Harley-Davidson Ā– the sole surviving American maker Ā– has understood that a successfuI marque relies at least as much on its perceived image as it does on high performance and sophisticated engineering. Because the "double-nickel" speed limit has so long been a fact of life in America, Harley's vision of the two-wheeler has proved a remarkable success. Harley has applied itself to updating and promoting its traditions with motorcycles of immense character which beguile the customer with their looks, their ample chrome, their sound and the emotions they stir. In buying Harley you are buying image Ā– but isn't that the same with Cadillac or Jaguar?

The ultra-rare Dyna Glide Sturgis is a limited edition produced to mark the anniversary of an extraordinary gathering of motorcyclists held since 1940 in South Dakota, near Mount Rushmore, in the shadow of Borglum's monumental sculptures of Presidents Washington, Jefferson, Roosevelt and Lincoln. Each year the Sturgis draws bikers from all over America. To celebrate its 50th anniversary, 400,000 bikes Ā– mostly Barleys Ā– gathered in 1990.

Ibis "Sturgis" is one of just three examples made of this very exclusive limited edition, dedicated by Willie Davidson.