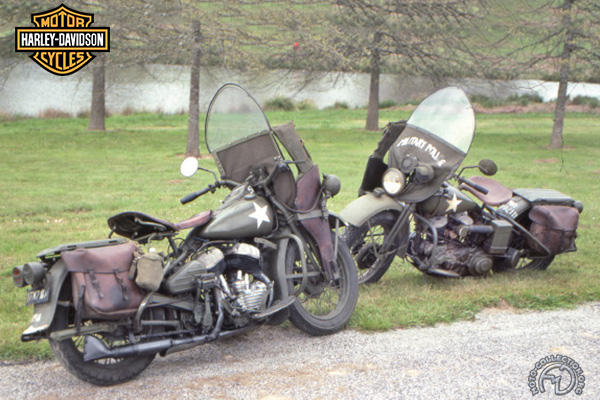 When America entered World War II, the US Army chose the 750cc WL 45 Harley- Davidson as its standard military motorcycle. Harley-Davidson produced 90,000 of these sidevalve "Milwaukee Hawgs" for the aimed forces between 1942 and 1946.

Used by the Police

However, the American top brass had never considered the motorbike as a front-line fighting machine. Particularly during World War II, American military motorbikes were used for liaison work and by the Military Police. Incapable of making progress through the jungle during the war in the Japanese theatre, rendered immobile by winter weather in Germany and the Ardennes overshadowed by the ubiquitous Jeep in Normandy, the Harley WLA was predominantly used by the police.

The WLA was basically the civilian WL 45 launched in 1929 and updated in 1937. Harley-Davidson had gained much valuable experience from the police version of the WL 45. This experience made the WLA virtually indestructible. It was used by the Military Police right through the war. The engine was still in production 50 years after its launch, powering the utility Servi-Car three-wheeler. Work had proceeded in connection with the WLA on a lighter military model, the BMW inspired 750cc XA 45, which had a flat-twin engine and shaft drive. Only 1000 were built before the end of the war.

With its huge saddle and leather rifle holster, the wartime Harley-Davidson recalled the American Old West.