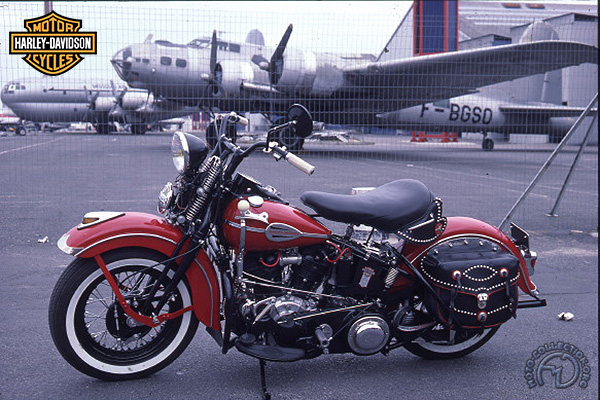 In its 90-year-history, Harley-Davidson could never have been accused of being technically adventurous. But this conservative outlook has saved the Milwaukee company from making disastrous mistakes. In the early Twenties, Harley-Davidson became the world's biggest motorcycle manufacturer, with an annual capacity of 35,000 machines.

Since 1909, the firm's hallmark has been the big V-twin, a policy that has ensured the survival of Harley-Davidson when all the other American motorcycle manufacturers have fallen by the wayside. In 1936 the company introduced the valve-in-head 61 cubic inch. (1000cc) Type EL, nicknamed "Knucklehead" because of the shape of its rockerbox castings.

The Knucklehead boasted such features as a four-speed gearbox with hand change and foot clutch, a double-cradle frame and pressure lubrication. After the war, America (which had imported only a handful of European motorbikes before the war) discovered the charms of the light, fast British twins. In 1946, America built just 20,000 motorbikes Â– and imported 9000, of which 8000 were English! To respond to this new scenario, Harley offered the Type 74, a 1200cc derivative of the prewar Knucklehead, which saw the light of day in 1941. It remained in production only until 1948.

The big Harley offered incomparable comfort, despite its rigid rear end. Other features made up for the awkward stiffness.