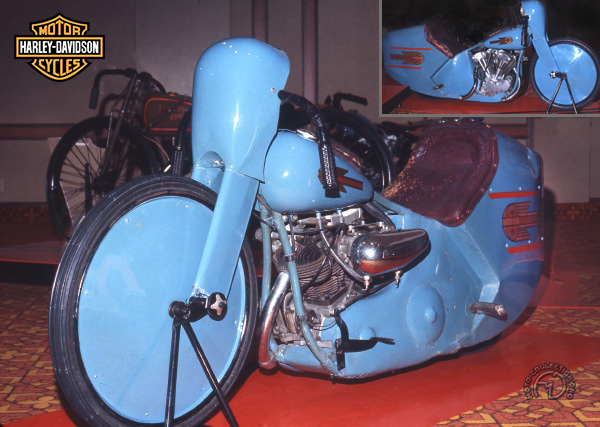 The new 1000cc Type 61 EL "Knucklehead" of 1936 was a real revolution for Harley. It had overhead valves (the first on a series-produced American motorcycle), four-speed transmission and an ingenious idea borrowed from V8 automobile engines Ā– pushrods of different lengths enabling inclined valves to be actuated by a single central camshaft.

After the half-hearted launch of the "61", Bill Harley was determined to stir up the image of his marque. Since 1917, Harley had been building racing bikes with four-valve heads, and Harley and H.M. Syvertsen designed an eight-valve record breaker with twin carburetors and special cams, which developed 65 hp. The machine was carefully streamlined Ā– a cut-down fuel tank casing served as a steering head fairing Ā– and fitted with wheel discs. Harley even attempted to fit the machine with a full fairing beaten from sheet steel, but it tended to lift the front wheel at speed and was removed for record attempts.

In March 1937, the streamliner was taken to Daytona Beach where, timed officially by the AMA, "Smokey Joe" Petrali rode a two-way mile at an average of 136.18 mph, with a best run of 139.13 mph, breaking the record of 129.8 mph set ten years earlier by an eight-valve Indian. The following year, the streamliner set another memorable record, when a lone rider covered 1,285 miles in 24 hours at Muroc Dry Lake.

The Harley record-breaker was a magnificent sales booster for the new Type 61E "Knucklehead": its impressive fairing was only fitted in full for exhibition purposes.