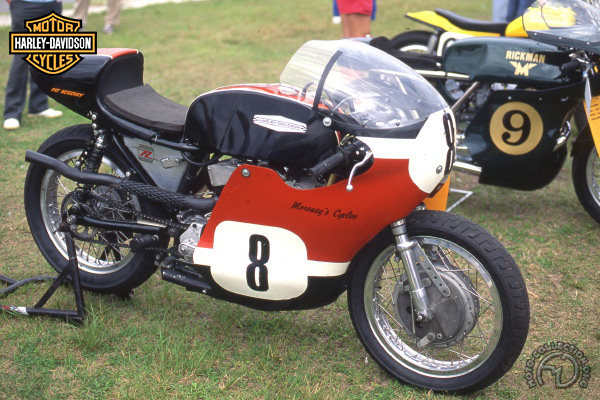 Since 1941, Harley-Davidson Motor Corporation has provided racers with purpose-built race machines. The WR had a tank shift with a foot clutch and separate engine and transmission. The 1952 KR was of unit construction with a foot operated shift and hand clutch. Both of these models were side-valve flatheads. The mid-1970 XR was of overhead valve design and continues through today. Harleys have taken all corners and continue to dominate the dirt track competition.

The list of men associated with the WR/KRJXR models is a who's who of American racing. Names like Sifton, Arena, Huber, Lawill, Andres, Leonard, Resweber, Markel, Roeder, Reiman, Peel, Breisford, Scott, Springsteen, Tilley, Carr, Parker, O'brien, and many others. Some of these men built careers upon the special knowledge that made the Harleys fast, designing modified parts for the privateer.

Cal Rayborn is on his way to winning the 1968 Daytona 200. The young, talented rider would win Daytona again in 1969. Harley-Davidson's XRTF road racer, basically the XR motor in a KR chassis, had been developed as far as it would go by 1973. Rumors persist that Harley will return to pavement racing with a competitive machine, and nobody should count them out.