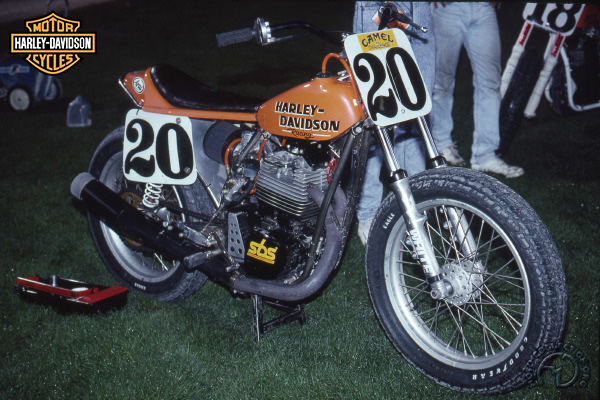 Harley racer with an Austrian accent

The American Dirt Track Championship was run on circuits of one mile, half-mile, 400 yard short track and "TT" steeplechase, which included right and left tums and jumps, often taken at over 100 mph. In 1984, the big 750 mile and half-mile racers were banned from TT.

Since the Italian-built Aermacchi horizontal singles were no longer made, in 1983, Harley-Davidson turned to the Austrian Rotax company for its four-valve singles so that the Milwaukee giant could return to short track and TT. These specially-numbered engines were built to the specifications of the Harley competition department, using special components that conformed with the American rules.

Californian tuner and Rotax importer Ron Wood was given the task of supplying three bikes and 23 engines for the first season. He created frames whose backbone doubled as an oil tank. Other machine preparers offered frames of differing design. Changes in the rules subsequently allowed the use of bigger capacities, leading to the use of 560 and 600cc Rotax units. In 1992, ten years after their birth, the 600cc Rotax-engined Barleys were still winning all the races and made up the bulk of the entries in short track and TT. Though its tearn officially retired in 1986, Harley still gives works backing to the best tuners and riders using its machines.

Born as a 500, the Harley-Davidson 500 R became a 600. This 1992 racer, prepared by Kenny Tolbert with works backing, is ridden by Chris Carr, boss of short track and racing for the past several years.