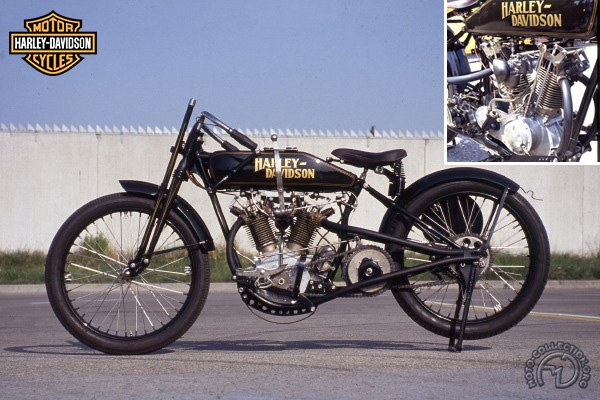 The last of originality

Even the rare few who are not moved by the Harley legend have to show a flicker of emotion when they come face-to-face with the Milwaukee marque's famed eight"valver.

Some will tell you that this was the last Harley worthy of attention, for it was also the last to make use of advanced technology! Just after WWI, with an annual production running at some 12,000 machines, Harley-Davidson passed Indian as the world's biggest manufacturer, and purists regard this bike as the last upsurge of originality.

Even then, Harley was not regarded as an innovator. Indian had experimented with a four-valve head in 1911, two years before Europe's first four-valvers came from Peugeot and Alcyon, and Harley's first venture into this field was not made until 1913. The British engineer Harry Ricardo, who had just created the immortal Triumph-Ricardo, assisted with the development of this experimental machine. Harley always preferred to let others do the pioneering for it. This cautious approach has ensured its survival. After the WWI, Indian and Harley four-valve singles and eight-valve twins battled for supremacy on American circuits. However, the technique had not been fully mastered and soon brute force, in the shape of side-valve V-twins, had taken over from the elegant eight-valvers. The multi-valve Indians and Harleys had deserted the racetracks by 1928 and been replaced by less adventurous designs. American bikes had begun the long years of technological caution.

Harley eight-valvers enjoyed racing success on both sides of the Atlantic; in England "Fiery Fred" Dixon fought notable duels on his Harley with the Indian twins on the Brooklands oval.