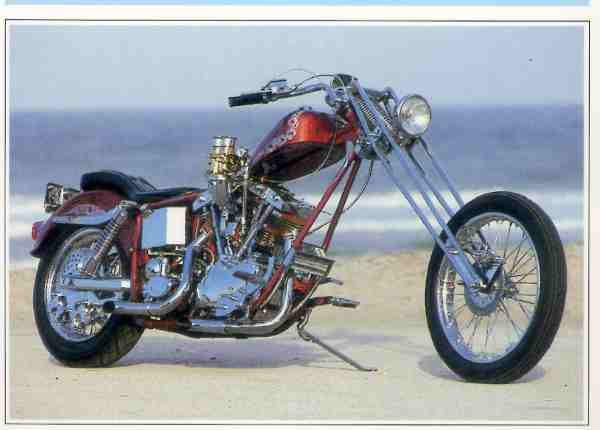 Ride to live and live to ride!

One of the most durable survivors of Sixties culture is the Chopper, a peculiarly American phenomenon whose very nature defies logic; it is the symbol of a way of life that thumbs its nose at conventional standards.

The genuine article, low-slung chopper, like this Harley-Davidson-based bike, goes beyond mechanical belief; the rule is to be as unorthodox as possible. The power unit is only significant for the amount of chrome that can be plated to it. The frame, often devoid of a rear suspension, is frequently fitted with an antique-style, chromed girder fork, stretched-out for an exaggerated effect.

But custom bikes often end up looking very much alike because, while there are no rules, there are conventions that have to be followed by those who want to be unconventional Â– tall girder forks and the low-slung look are just parts of the whole Easy Rider image. Countercultural to the core, the full-house chopper has had an unexpected influence on production models. It gave birth to the popular "Custom" category, a group of machines designed for kicking back and cruising, when style is considered more important than sheer performance.

A leftover from the Sixties, the chopper not only turned heads in its day but also had an uncalculated influence on production models.