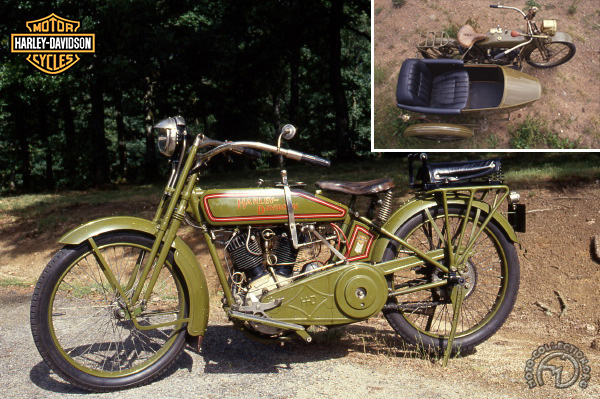 "The first Yank to enter Germany"

When the US entered WWI in 1917, Harley-Davidson offered 50 percent of its production to the government. Its Model J was produced in both civilian and military versions. More significant was a 25 percent increase in engine power, thanks to experience on the racetrack Â– stronger forks were also fitted.

When the Harleys of the US Army disembarked in France, they caused a sensation. In a country where 95 percent of the native motorcycles were belt-driven single-speeders, and many still had automatic intake valves, the Harley-Davidson broke new ground.

France had never seen a 1000cc touring bike. It had mechanically-operated valves, a three-speed transmission with primary and secondary chain drive, a robust clutch and even a full electrical installation with lights, horn and coil ignition. Harley contributed 15,000 bikes to the US war effort, and of those sent to Europe, many were left behind in vehicle dumps and eventually found their way into civilian ownership. In France, they took part in many postwar races, such as the 1920 French GP, in which Verpault won the 1000 sidecar class. And the first US soldier to enter Germany at the end of the war was Corporal Roy Holtz, who inadvertently rode his Harley outfit into enemy territory during a rainstorm on November 9, 1918 and was held captive by a German patrol until after the Armistice was signed two days later.

"The first Yank to enter Germany", Cpl. Roy Holtz, made his historic (if accidental) foray into enemy territory on a Harley outfit like this Model J with Chicago-built Rogers sidecar.