Harley Davidson - 1000 Flxible side car
Back to brands list 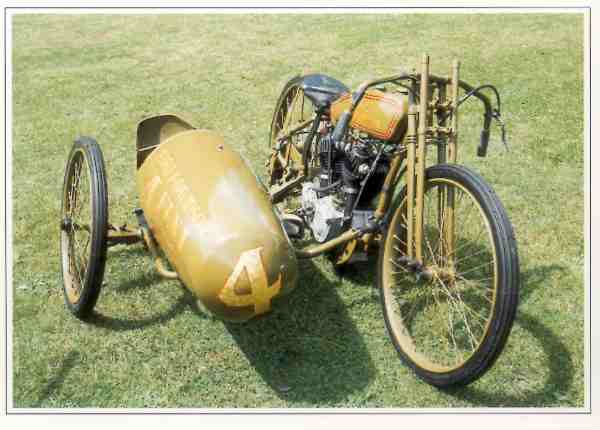 At the beginning of the 1920s, the sidecar class was so popular in dirt-track racing in the US that it was the main attraction at many events run on local horse-race mile circuits.

If the speeds of the outfits were less than those attained by the solo machines, the acrobatics performed by riders and passengers power-sliding around the bends were often quite spectacular.

The bikes used in these races included Harley-Davidsons, Indians, Excelsiors, Hendersons and Aces Â– but there was only one make of sidecar for the true believers. Built by Flxible Sidecars of Loudonville, Ohio, the FLXI racing sidecar was articulated so that it could be banked over on bends just like a solo motorcycle. There were two hinged points of attachment between the sidecar and the bike, while the rear attachment point was also linked to the sidecar wheel so that it leaned over with the bike. Riders had a special technique for dealing with left-hand bends Â– as the outfit went into the bend, the rider leaned the bike as far as he could into the curve while pushing against the sidecar body with his right leg and opening the throttle wide. The result was a thrilling slide around the bend, a daring and dangerous manoeuver that caused many accidents in the 1920s.

This racing 1000cc Harley "pocket valve" is coupled to a FLXI sidecar with its amazing banking wheel, which worked like an automobile steering gear.