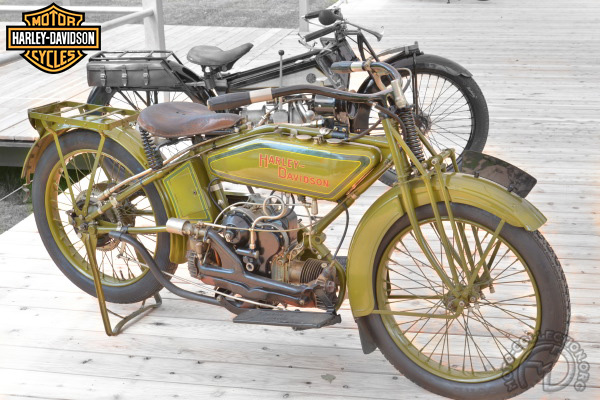 Harley Davidson is famed above all for its large capacity V-twins, but the Milwaukee maker also built singles up to 1918. And, from 1919 to 1923, this flat-twin "Sport" was in the line, too. Several thousand examples of this remarkable bike were built, mostly sold in export markets like Great Britain and Australia, in W Sport and WL versions. At the end of 1923, however, Harley decided to abandon production of this model and concentrate on its V-twins, whose massive displacements were a selling point in the United States.

The cylinder layout of the Sport was borrowed from a 1917 Indian design. The engine's overall dimensions were smaller than Harley's 750cc V-twin Â– 44 lbs. lighter, 26-inch tires instead of 28-inch, a wheelbase of 83 inches instead of 92 inches Â– making the sport a much livelier Harley than usual.

The bike had a new and complex front suspension, and the engine employed some ingenious technology Â– the inlet and exhaust manifolds were cast in one piece - while it had chain transmission (running beneath the crankcase), first seen on Harleys in 1912. In California's Death Valley, where it rains only once every seven years and where the temperature can top 250 degrees, a flat-twin Harley climbed to the 12,500-foot summit of Mount San Antonio and covered over 1200 miles without breakdown.

Brakes: expanding and contracting brakes on the same drum (rear)

The W Sport enjoyed much success in America and even at Britain 's Brooklands circuit. In 1919, a flat-twin Harley beat the existing Canada-Mexico record held by a 1000cc Excelsior, covering 1685 miles in under 65 hours.