Hazlewood - 636 JAP & Side car Montgomery
Back to brands list 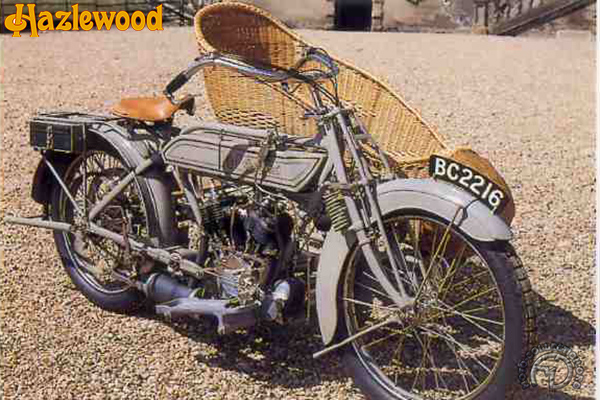 Built for the Empire

Hazlewood of Coventry specialized in building motorcycles for export to the colonies of the British Empire, especially Australia, New Zealand, South Africa and Canada.

To withstand often appalling road conditions, the machines had to be particularly solid and equipped with reliable engines needing a minimum of maintenance. The first Hazlewood models appeared in 1905. By 1914, the firm had earned a sound reputation with its mostly JAP-engined machines, but few survive today.

When WWI began in August 1914, exports of Hazlewoods ceased and sales were restricted to the home market. The motorcycle pictured was sold complete with a Coventry-made Montgomery wicker sidecar. But when the magneto failed in the mid-1920s, its owner pushed it into his garage in disgust. It remained there until his death in 1964, when it was sold at auction. This Hazlewood was equipped with the smallest twin made by ]AP at that time, a side-valve 636cc unit. It had chain transmission to a transfer gearbox and the clutch, then by belt to a three-speed Armstrong hub. The gear lever was mounted on the left side of the tank with a quadrant marked "Slow" (forward lever), "Fast" (central lever) and "Middle" (back lever). The large aluminum foot boards were typical of the time, as were the superb "cow horn" handlebars.

Restored to its original condition, this 1914 Hazlewood is equipped with a woven wicker sidecar in the original Montgomery pattern.