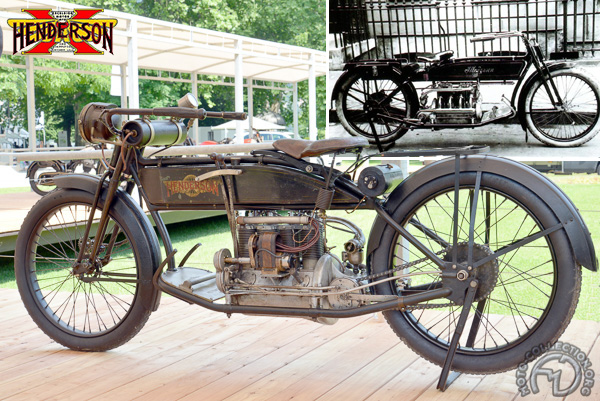 The brothers William and Thomas Henderson began building motorcycles in 1912, and just one year later achieved world fame when one of their bikes was ridden around the world by New Yorker Carl Clancy. He covered 14,300 miles without reporting any serious problems. The Henderson was the most successful of the various turn-of-the-century American four-cylinder bikes. In 1917, the two brothers joined the renowned Excelsior company, which kept their four-cylinder machines in production right until 1931.

The original design had an unusually laidback riding position, with the foot boards set ahead of the engine in the long frame, rather like a modern custom bike.

The wheelbase was a remarkable 65 inches, giving excellent stability on the long straight roads of the US, at the expense of maneuverability Â– although it left plenty of room for the Henderson inline four, a well-designed and built, unit-construction engine that changed little over time. Like many engines of the pre-WWl period, it had an F-head layout with the intake valves mounted above the exhausts; the single carburetor was mounted behind the engine on a long tubular manifold. It had an automobile-type clutch and was started by a crankhandle on the right of the machine. There was initially no gearbox (though a two-speed rear hub made its appearance in 1914). The following year, the Henderson factory in Detroit abandoned the long-wheelbase design in favor of a more conventional layout.

The first motorbike to go around the world was a Henderson Four, similar to this 1913 model.