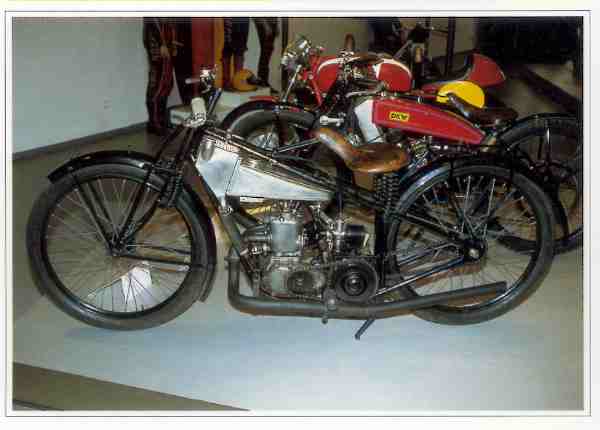 Brothers Helmut and Wolf Hirth were German aviation pioneers. Helmut, the elder, launched his own marque of motorcycles in Stuttgart in 1923. His first creations were powered by water-cooled, double-piston 125 singles from which he soon developed a 250 twin whose layout inspired that of the highly effective 350 Puch Monza of the same era.

Built for the Racetrack

The sole purpose of these bikes was competition, the ideal proving ground for Hirth's ideas. His machines were at the leading edge of metallurgy for their day, thanks to his aeronautical experience, and were extremely fast and powerful. They were also fragile, or at least unreliable, because of the demands placed on their components - no other engine of the period was capable of reaching such a high rate of revolutions!

Wolf Hirth, who raced his brother's motorcycles, had a leg amputated in 1925 after an accident, but that didn't prevent him from carving out a brilliant career. On June 13, 1926, he established a new record on the Berlin Avus track at an average of over 60mph. As evidence of the advanced level of development of their engines - and the fact that racing really does improve the breed - the Hirth motorbikes were used by Bosch for spark plug testing after their racing career ended at the end of 1926. The name Hirth is still well known in engine technology from Helmut's invention of the "Hirth joint," which unites two coaxial rotating shafts, such as crankshafts, by radial serrations.

The Hirths were among the most advanced machines of their day and, despite their hand made construction, were formidable performers on German racetracks.