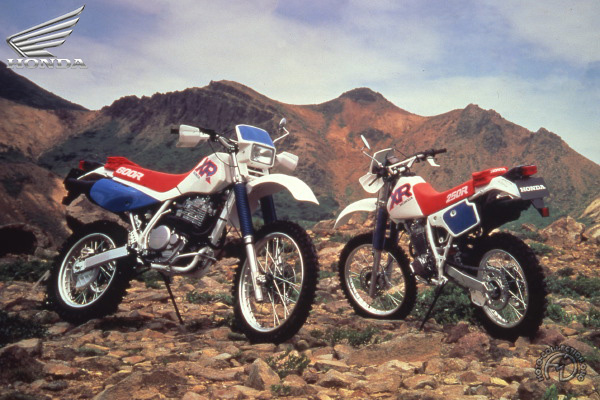 King of the wide frontier

In 1992, the Honda XR celebrated its tenth birthday. For a bike to reach such a production span is a sure sign of thoroughbred virtues. It's impossible to challenge the XR 600 Â– it's an institution.

Launched in 1982 in 500cc form, three years later the "big" XR inherited the excellent 600cc RFVC engine with four radial valves. Since then, the XR 600 has progressively evolved, principally in terms of suspension and gaining a disk brake at the rear, but also in detail refinements that have made it the thoroughly perfected machine it is today.

Long before HV A and Husaberg, the XR 600 played to the taste of many enduro riders for engines with valves. Plus, as a bonus, it had the aura of sterling success in American desert races like the mythic Baja 1000, the Parker 400 and other Mexicali races won at mind-bending average speeds by the likes of Al Baker, Dan Ashcraft, and Bruce Ogilvie. The XR 600 forged the legend of the "big thumper" in the shadow of the cactus of New Mexico. Since then it has widened its field of action to African rallies, in which it is the favorite mount of privateers, who want a machine that is both reliable and performs well. Its engine has remarkable flexibility and its frame is well-balanced, but the XR 600,

physically constrained in the narrow tracks of an enduro, needs wide open spaces to give its best performance.

Even though it bas always been sold in unhomologated form, the XR 600 is still one of the most highly sought-after enduro machines.