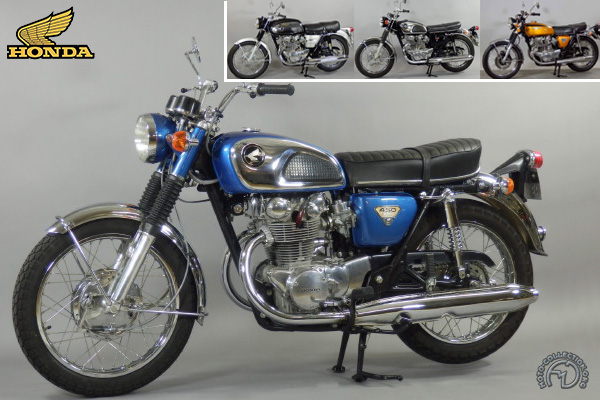 The Japanese attack that would deal a fatal blow to the European markets and the local motorcycle industry took off in 1969, with the 750 four-cylinder Honda. The first direct hit Â– the 450 Honda Â– exploded at the end of 1965 in the seemingly impregnable kingdom of the British big twins.

New Features for a Production Bike

The kings of the road were still Triumph and Norton. These ultimate descendants of a long line of overhead-valve twins with separate gearboxes had nothing but their image and capacity. The first large-displacement Honda dealt them a cruel blow. The 450 Honda offered a host of sophisticated and original technical features. Following a technique inaugurated in 1960 with the CB72, the firing order of the two cylinders was staggered at 360 degrees, balance was improved and the new 450 Honda could turn at a spine-tingling 10,000 rpm. It had twin overhead camshafts and torsion bar valve springs, a feature previously seen on the unorthodox Panhard Dyna cars of the 1950s.

Another unorthodox feature was the use of suction carburetors; the finishing touch was the fitting of an electric starter. This mechanical jewel cost little more than the rough-hewn Triumph 650 Bonneville. Honda built up its public image and the CB450 remained in the catalog for ten years with regular improvements.

The 1969 MK2 version of the CB450 features the five-speed transmission launched in 1967; the 450 featured in the Japanese catalog was styled like the 750.