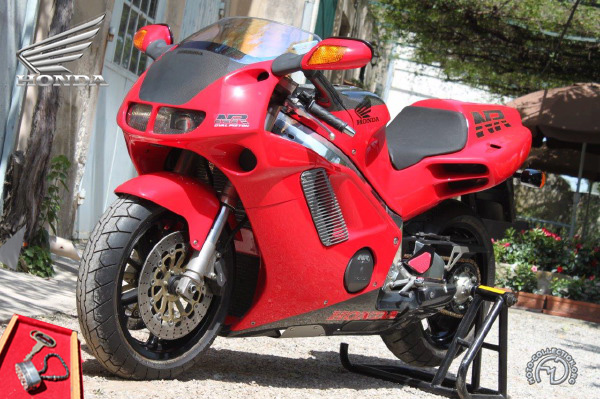 "The Big Four of the Japanese motorcycle industry (Yamaha, Kawasaki, Suzuki, and Honda) are engaged in a bitter struggle for technological supremacy. The majority has chosen to produce mass-market: Yamaha offers the 1000 FZR, Kawasaki has its 750 ZXR-R and Suzuki - with models like the 250 RGV - markets replicas of its Grand Prix racers.

Honda, on the other hand, has chosen a different route by opting for more realistic mass-market models while building its high technology superbikes in limited editions. After the fabulous RC 30, a 750cc replica of its victorious endurance racers, the latest in this vein is the NR 750, the most advanced superbike ever built.

Its story started back in 1979 when Honda returned to Grand Prix racing with a fourstroke bike. That original NR was a failure, despite Honda's determination to make it work, and it was replaced by a two-stroke racer. The idea of a V4 with oval pistons was conceived by the brilliant engineer S. Irimajiri, who had earlier created the 1966 250cc GP racer and the 1978 1000 CBX production six-cylinder. Irimajiri returned to the idea in 1990 with the NR 750, the ultimate V4. It combined Honda's most advanced technology with the wide use of exotic materials.

The NR is perhaps the most technically advanced superbike ever built. It was launched as a prototype in 1990.Â”