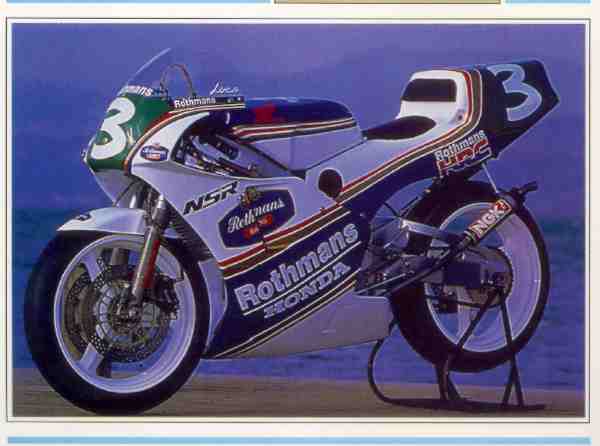 "In Grand Prix racing, the class to watch in recent years has been 250cc, where - unlike the limited field that exists in 500cc racing the races are more spectacular and there has been a wide variety of machines.

The current favorite in the 2 50cc class is the Italian Luca Cadalora. World 125cc champion in 1986 riding a Garelli, Cadalora raced in the 250cc class for three years with the Marlboro- Yamaha team and was third in the world championship in 1990 before joining Rothman's-Honda for the 1991 season. After Yamahas were withdrawn from the competition in 1991, the Hondas were untouchable, and Cadalora made the most of the situation with a very consistent performance.

Like the 500cc machines, 250cc racers have evolved remarkably in recent years. The last of the parallel twins have disappeared from the scene and two-stroke V-twins dominate the field nowadays. Atmospheric intake valves and mechanical exhaust valves are state of the art, as are twin-beam cast aluminum frames with underslung engines, inverted forks, and dog-leg rear suspension forks. Like their 500cc big brothers, the 250s are increasingly cornered in spectacular twowheel slides, with the rider crouched low over the tank, knees - and even elbows - scraping the track!

The dynamic duo of 250cc racing is Cadalora and Honda - both dominated the 1991 250cc championship.Â”