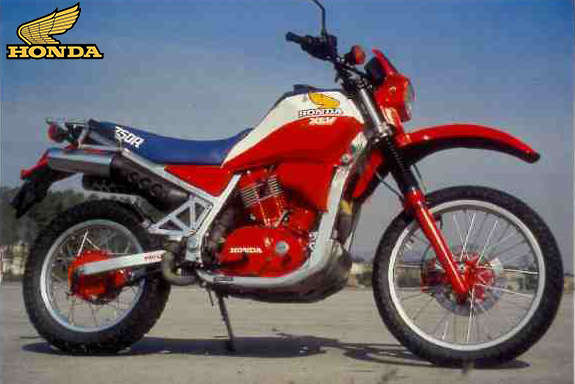 The craze for trail bikes was at its peak in 1983. The huge success of the Paris-Dakar Rally in France and Italy, drove the two biggest Japanese companies into head-on competition, starting a trend for replicas of the motorcycles built for that famous trans-Sahara event. So at the 1982 Paris Salon, the Yamaha 600 Ténéré single faced off the Honda 750 XLV, a surprising motorcycle.

Hewn from the Solid

Massive and solid and with an aggressive color scheme based on the firm's competition lively, it even had the power unit painted fire red as on the works motocross machines. But Honda was guilty of misrepresentation, getting too far adrift from its basic concept. The flashy, pseudo-sporty presentation was not at all in tune with the personality of the machine, which was actually a remarkable touring motorcycle.

Hampered by an image and characteristics that were diametrically opposed, the XLV was shunned in its initial versions and only found success later. Honda learned its lesson and followed the XLV with two models Ā– the touring 600 Transalp and the sporty Africa Twin. But the XLV wasn't lacking in good qualities. Its modern V-twin engine had a long stride, tons of power and torque, would happily carry two and their luggage and treated excursions into the boondocks like a stroll in the country. It was just a shame that the market wasn't ready for GT trail bikes.

The XLV was given a more sober color scheme in 1985 and then replaced by the Transalp two years later.