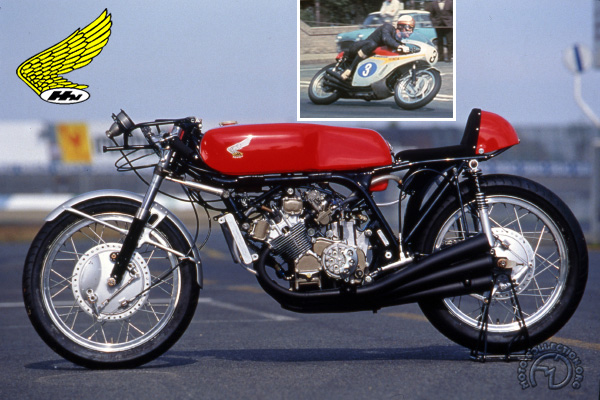 There was a sensation at the end of the 1964 season when, at the Grand Prix des Nations on the Monza circuit in Italy, Honda unveiled its 250cc six-cylinder machine intended to break the domination of the Yamaha rotary-valve twins ridden by Phil Mike Duff. Nevertheless, some people thought Honda should have waited until 1965.

To maintain its image as master of four-stroke technology, Honda (and its engineer S. Irimajiri) opted to create a transverse six-cylinder power unit in 213 and 297cc versions, which remains one of the outstanding engines in motorcycling. Breaking down the displacement into six small "bites" enabled the engine to rotate at a mind-blowing 18,000 rpm and create an ear Â– a ' splitting exhaust note of such power that recordings of Mike Hailwood's Honda Six became a best-seller among motorcycle buffs.

The Legend of Mike the Bike

Thanks to the advanced warning by Honda, which may have unveiled its six too soon, Yamaha entered the arena with a four-cylinder two-stroke a year after the faltering debut of the 250/6. It was a wasted effort. In 1966, Honda dominated the Championship thanks not only to its extraordinary power unit but also to its new rider Mike Hailwood, who had left MV after winning four world 500cc titles. The idol of his clay, "Mike the Bike" and his Honda 250 and 350 sixes won the World Championship in both classes in 1966 and repeated the feat in 1967.