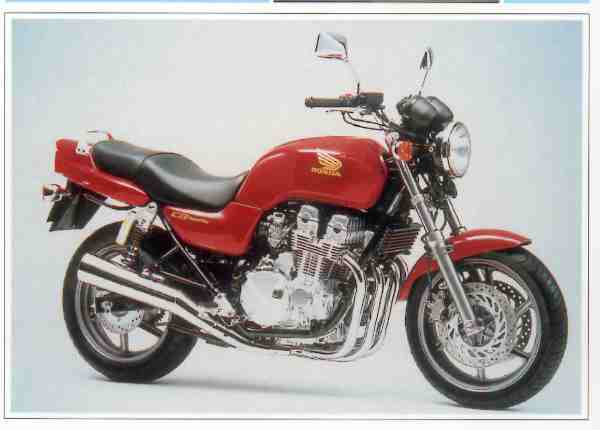 Honda took motorcycling in a different direction with the launch of the 750 Seven Fifty and Nighthawk in 1991. For years, bikes had been getting faster, more complex, more specialized Ā– and more expensive. Here at last was a simple, versatile 750cc four with enough performance to be fun, and with a bargain price. The Seven Fifty was for Europe and the Nighthawk, more economical, dedicated to the States.

Its enthusiastic reception was partly clue to a craze for traditionally styled "retro" bikes, but the air-cooled, 747cc straight-four engine and twin-shock chassis layout were adopted for more pragmatic reasons. Shaped by extensive market research, the bike was created especially for the US market as a "New American Standard."

Many of those bikes components were borrowed from previous models, including the twin-cam, 16-valve engine, which had been introduced in the CBX750. Suspension was new and of basic specification; the nonadjustable forks and twin shocks held unfashionable 18-inch wheels. European CB Seven Fifty model differs with its 17Ā’ wheels, twin front discs, rear disc brake (drum for US) and rear damper with separate oil tank. It is also 11 hp more powerful. Neat styling disguised the fact that other parts, including lights, fenders and brakes, also came from previous models. The engine was impressively smooth and responsive in the midrange. An upright riding position did not encourage fast cruising, but the Honda's broad scat made the bike comfortable at low to medium speeds. Nighthawk and CB Seven Fifty were competent, unspectacular motorbikes with one great asset: spectacular value for the money.

Simple but effective styling helped create a useful and enjoyable bikes for the US as well as for Europe.