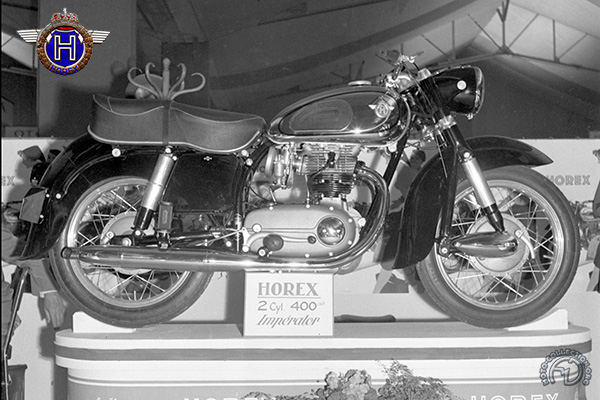 Advanced twin with an English accent

During the 1950s, Horex occupied a place slightly out of the mainstream of the German motorcycle industry. Its styling was more English than German.

From Jelly Jars to Big Twins

Horex was born during a slack period for a maker of glass jelly jars that wanted to diversify its activities. The first Horex Â– short for Homburg (location of the firm's head office) and "Rex Konservenglass Fabrik" Â– appeared in 1924. Until WWII, the firm built a variety of single-cylinder bikes and a vertical twin in 600 and 800cc versions.

During WWII, Horex opposed the Nazis and consequently was permitted by the Allies to resume production in 1950. This privilege was not universally appreciated and the press largely ignored the new models and sporting successes of the Horex marque. The "Imperator" twin was launched in 1954, with its displacement cut to 400cc from the 500cc of the preproduction prototypes. The engine was modern in design, with a single overhead-camshaft driven by a chain passing between the cylinders, and developed 26 hp at 5800 rpm. As for the suspension, the choice was left to the customer, who had the option of a telescopic fork or an Earles leading link better suited to sidecar use. Like all the Horex models, the Imperator distinguished itself in track competitions with its RS version and also off-road with the GS. The economic downturn of the late 1950s was fatal to Horex; output fell dramatically and ceased altogether in 1960.

The Imperator was one of the most up-to-date bikes of its day, inspiring a later generation of Japanese machines like the Honda CB450.