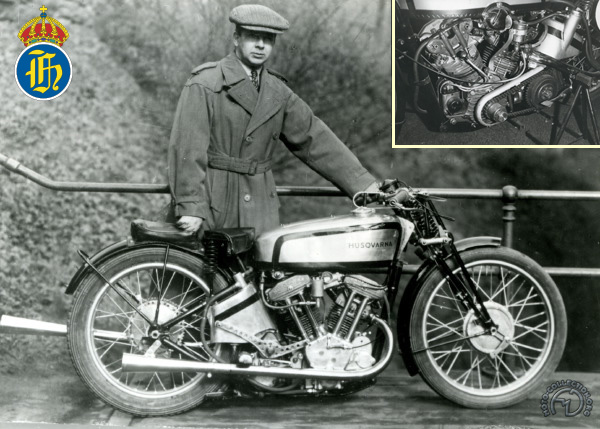 These days Husqvarna is known only for its off-road bikes - and even those are in the 90Â’s made in Italy by the Cagiva group. The Swedish marque nevertheless has a colorful past which goes back to 1867. Long established as a maker of pedal cycles, it built its first powered two-wheeler in 1903, using a Belgian FN engine. From 1919, Husqvarna built its own 500 and 1000cc V-Twin engines which enjoyed a distinguished career on road and track until 1936.

From Local Races to Grand Prix

Right from the start, Husqvarnas were successful in the big endurance rallies that were so popular in those days, but their real start in racing came in 1928 with curious record-breaking motorcycles with small back wheels. Husqvarna's debut on the international Grand Prix scene came in the Swedish GP of 1930, with a 500 powered by an own-make engine and capable of 103 mph - it finished third - plus two JAP engined singles.

Husqvarna was the Swedish importer for these famous English engines and this relationship had a great influence on its own- make engines. In 1933, engineer Folke Mannerstedt designed a new 500 for the riders Sunnqvist and Gayer. It was a superb machine which, thanks to a magnesium crankcase, cylinders and cylinder heads made in light alloy, and tapered hub brakes made weighed a mere 291 lbs. The final 1935 GP "Husky" weighed 282 lbs. , and Stanley Woods set a lap record of nearly 81 mph with this machine in the Tourist Trophy.

Tbe last GP Husqvarnas were built in 1935, but this extraordinary machine- updated with a telescopic fork- was still racing in 1960.