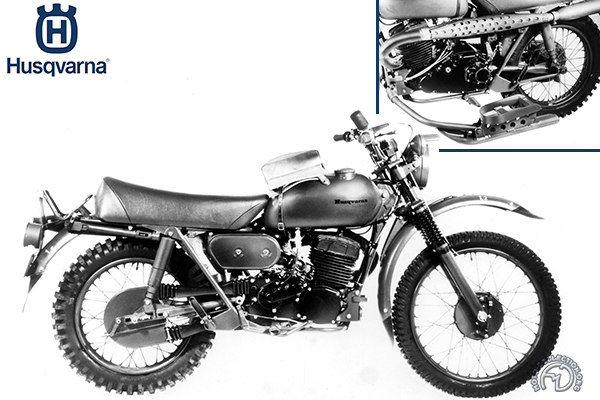 A two-wheeler for the military

It was in response to a specification issued by the Swedish Army that Husqvarna began developing an automatic off-road motorcycle in the early 1970s. The specifications insisted that such a machine should be easy for non-motorcyclists to ride. Since the Arctic cold ruled out the use of a hydraulic torque convertor, the Swedish manufacturers were forced to seek alternative solutions.

Using the existing 250 enduro machine as a starting point, Husqvarna developed a motorcycle with pneumatic fuel injection and a novel transmission. It retained a conventional gearbox, but with each ratio progressively engaged by a centrifugal clutch as the speed increased. A ratchet device released each gear as the next one was selected, while a free-wheel came into play during deceleration.

Once the system was perfected, it proved particularly easy to use, though the use of the brake took a little getting used to. The Swedish Army loved the Husqvarna and duly placed an order, though civilian riders scorned this ingenious system, which went into series production in 1976 at a relatively affordable price. Died-in-the-wool riders mistrusted the automatic. After Cagiva took over Husqvarna in 1987, it attempted to rationalize production by transferring it to Italy, and sacrificed the automatic in the interests of cost. They acted too soon as Honda tested soon after an off-road automatic.

With neither clutch nor gear-selector, the Husqvarna was a practical automatic off-roader; it even came with demountable skis.