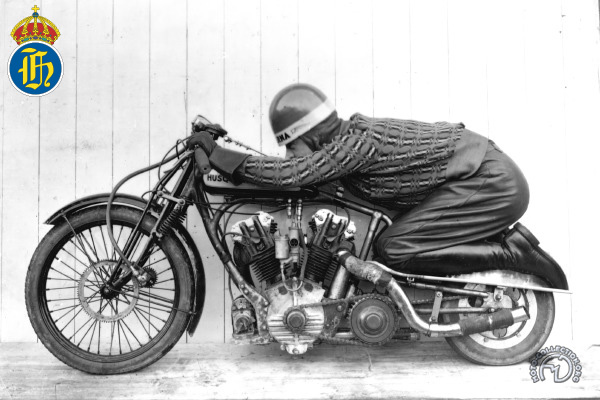 The first real competitionHusqvarna, an ohv V-twin based on the series-production 550, appeared in 1925 and was a racing success. Yet, the fashion then was record-breaking and in Sweden that often meant on ice! Early in 1923, Husqvarna director Gustav Tham signed engineer Folke Mannerstedt, former rider of Belgian FNs, with the view of promoting his marque through sports success.

Mannerstedt created an engine for Husqvarna's works team for the ISDT. The first sketches were made in February 1929, and the first three bikes - two 500s (65x75mm) and a 700cc sidecar machine - were running in August!

These were developed with special versions for record-breaking and the TT in mind. In 1930, Husqvarna went for records in the 350 class and began by building a bike based on a 600 V-twin with the rear cylinder removed. During testing, it developed 47 hp at 7500 rpm, but the engine blew up. Husqvarna applied the same technique to its 700 V-twin. The 350 had a small rear wheel to enable the rider to adopt an aerodynamic position. In 1930, on the ice of Lake Strorsjons, Mannerstedt reached 84.16 mph with a sidecar over the flying kilometer and 84.55 mph over a mile. His solo

attempts were fruitless. In 1931, new attempts on the 350 solo and 700 sidecar records were made at Bedinge, where Stig Tham covered the flying kilometer at 99.2 mph on a 350. The front cylinder had been removed and the mechanical basis of his bike was the new "Six Days" engine, which used the "TT Special" cylinder head for the first time.

The strange riding position of the Husqvarna ice record machines, built as a 700 (photo) and a 350, improved its aerodynamics.