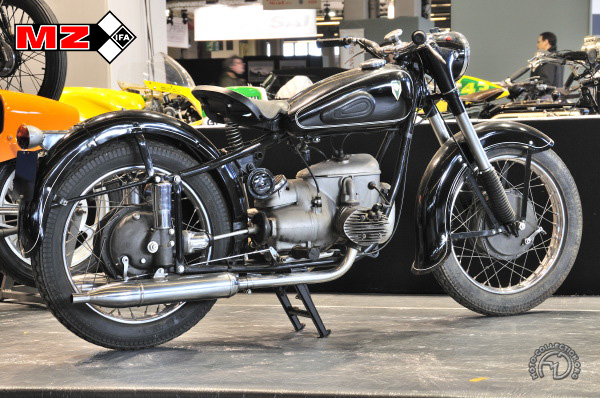 After World War II, the German DKW factory, universal leader in the building of two-stroke engines, found itself on the wrong side of the Iron Curtain in East Germany, and was renamed first IFA, then MZ ("Motorradwerke Zschopau").

The 1952 BK 350 was one of the first models to bear the new MZ badge, and it remained in production until 1959, with an important modification in 1956, when Earles leading-link front forks were fitted. The BK 350 was an example of that great rarity, the flat-twin two-stroke. Its highly advanced construction made use of such techniques as shaft final drive, but its commercial success was restricted by the depressed state of the market.

In 1956, it was shouldered aside Ā– and ultimately replaced Ā– by simpler, more economical single-cylinder two-strokes. As a prelude to its great sporting success in speed and off-road events, and in its first years of existence, the MZ factory at Zschopau utilized the BZ 350 for its first entries in the ISDT Ā– International Six Days' Trial Ā– where in 1956 Horst Liebe won a gold medal riding a BZ 350. Apart from its cross-country equipment, this bike was no different from the standard machine.

Though it was identified as an IFA-MZ, the BK350 should be regarded as the last of the classic DKW two-strokes.