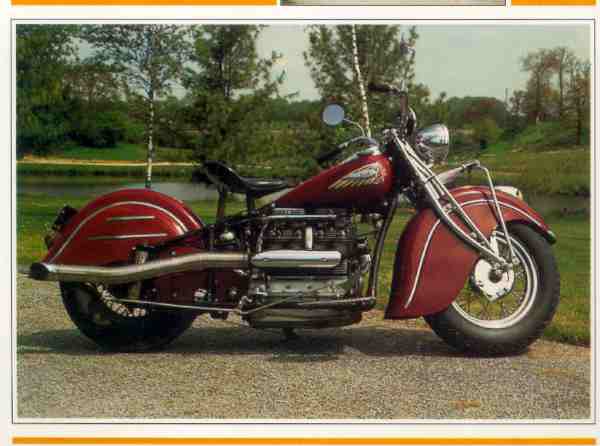 End of the line

All that remains of the long history of the American motorcycle today is Harley Davidson and its unchanging V-twins. But the land of the wide-open spaces once boasted a multitude of makes and models, particularly a long line of four-cylinder bikes, of which the Indian 441 was the last Â– and maybe finest Â– example.

It was in 1927 that Indian, one of the greatest American makes, bought another notable manufacturer, Ace, renowned for its in-line fours. Ace production continued little changed until 1936, when Indian unveiled a curious new four with overhead exhaust valves and side intakes.

Best of the American Fours

Then in 1938 came a new model that was to prove one of the best of the American in-line fours. Its power unit had the cylinders cast in pairs with light-alloy cylinder heads; Indian had returned to the normal valve layout for this type of power unit, with overhead inlet and side exhaust valves. Sliding pillar rear suspension was added in 1939. The year 1940 saw the appearance of the flamboyantly skirted fenders that were to characterize American bikes at that period. The Indian Four remained in that form, with minor detail changes, until the end of production in 1942. Although the Springfield, Massachusetts, company studied several prototypes for postwar production, the '42 model remained the last of the American straight fours.

Luxurious and well-equipped, the Indian Four was ideally suited to the fitting of a sidecar, like the rare Goulding built in Michigan.