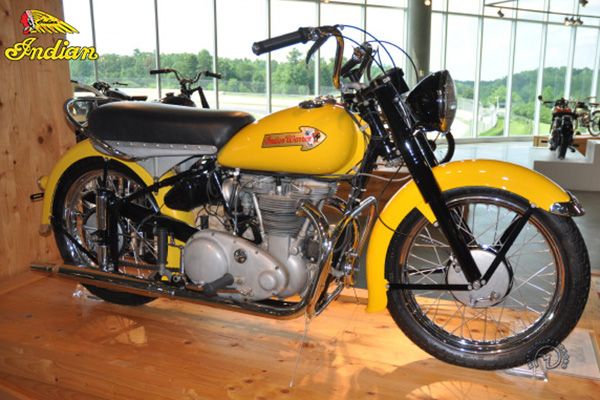 In 1948, Indian brought out the entirely new Model 249 to counter the increasing number of British imports. lt was basically a twin-cylinder version of the 217cc Model 149 "Arrow" launched around the same time.

The Model 249 abandoned Indian's traditional V-twin power unit in favor of a 360-degree vertical twin with separate gearbox, a layout used by the majority of the English imports. Though it differed from them by following the German fashion of fitting the primary drive on the right-hand side of the engine and the gear-selector pedal on the left.

Because the pushrod housings stuck out so far, only a single carburetor could be used, which meant that no sport version of the power unit was available. The Model 249 was christened "Scout," in the hope that this famous Indian model name would bring the new machine the same success as previous generations of Scouts had enjoyed. Sadly, the new Scout Ā– available in three levels of specification Ā– proved unreliable. In addition, its 435cc engine was lacking in power compared with its 500cc British rivals. The latter failing was quickly rectified with the introduction of the Warrior, a bored-out 498cc replacement for the Scout. It was slightly more powerful, but it was still not a viable basis for a sport derivative. There were seemingly endless teething troubles, sales figures were dismal and instead of saving Indian from disaster, the Warrior hastened its downfall.

The British-inspired styling of the Indian Warrior Ā– seen here at a 1992 rally of classic bikes Ā– failed to save the marque from financial disaster.