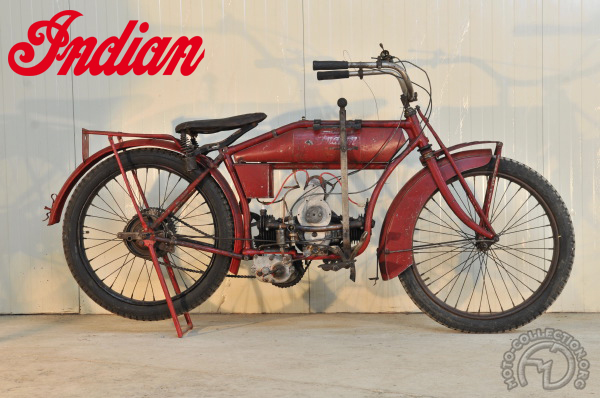 After the 1912 Featherweight the Model 0 represented the second attempt by the firm to market a lightweight machine in the US. Convinced that the end of WWI would signal the opening of a market for cheap utility motorcycles, Indian executive Frank Weschler decided to launch the Model 0.

Designed for a New Clientele

The single-cylinder 225cc Featherweight, designed along European lines, had failed to make its mark. Indian hoped that the Model 0 Â– reputedly inspired by the British Douglas flat-twin Â– would compensate for this setback by attracting a new type of customer who didn't want machines as big and powerful as Indian's famous V-twins.

Created by Indian's new chief designer, Charlie Gustafson, the Model 0 proved to be reliable, light and relatively simple to use. It was also twice as powerful as its two-stroke predecessor. However, having failed to excite the interest of the marque's dealers and clientele, it was dropped from the Indian catalogue after barely two years. For American motorcyclists there was no substitute for cubic inches, and however good the Model 0 was, it did not possess the charisma of Indian's big V-twins. Additionally, it had the misfortune of appealing to the feminine market and was soon being catalogued as "a machine especially designed for the fair sex." That was enough to sound its death-knell.

Brakes: none (front); drum with internal and external shoes (rear)