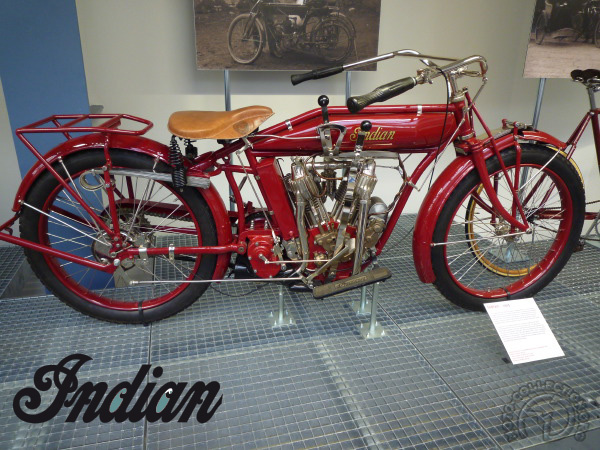 The sports bike that conquered the world

In 1909, it was time for Indian to find a successor to its first V-twins, created in 1906, by mounting two tall single cylinders on a common crankcase.

The new model, which shared many features with the works racers created for Jake de Rosier, a rider famed across the world, was marketed in two displacements Â– the "Light Indian" of 620cc and the "Big Twin" of 1000cc Â– and used a new long-wheelbase, continuous-loop frame identical to that of Jake de Rosier's racers. The 42-degree V-twin engines used a race-bred layout, too, with overhead intake valves and side exhausts.

These two models were made from first-class materials with the greatest possible care, and demonstrated their reliability with long-distance records. In 1916, Erwin G. "Cannonball" Baker used an Indian twin for a celebrated "sea to shining sea" dash, crossing the US in 11 days, 12 hours, 10 minutes on a machine he had not even seen until three hours before the drop of the flag! In 1911, Indian sent a team of racing 500cc "Light Twins" to England, but it was a privately-entered Indian ridden by O.C. Godfrey that gave Indian its first victory in the Isle of Man TT that year. It was the first-ever TT victory by a foreign machine. Production rocketed back in Springfield, Mass. In 1912, Indian built 20,000 machines; by 1914 production reached an astounding 60,000, sold through a worldwide network of 2,000 dealers.

Preserved in wonderful original condition, this Indian Big Twin of the 1913-15 series is the deluxe model with rear suspension and three-speed transmission.