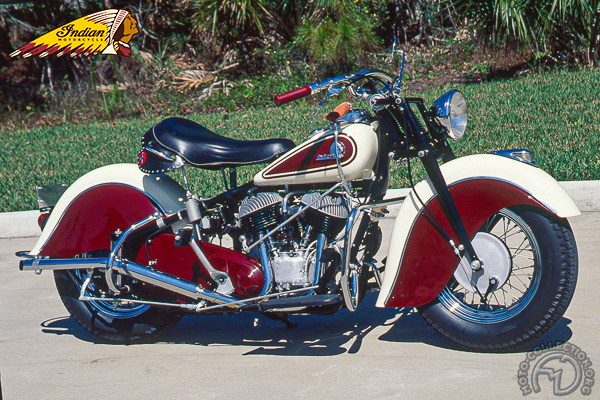 Founded in 1901 by two former cycle racers, George Hendee and Oscar Hedstrom, Indian was one of the oldest US marques. Hendee built bicycles. Hedstrom was a precision toolmaker. Together they created a powered bicycle that became a US legend.

Hail to the Chief!

Indian built its first V-twin in 1907, and a 1000cc twin was the chosen power unit for the first Indian Chief, which debuted in 1921. It was designed by Irish-born engineer Charles B. Franklin, who had ridden an lndian to second place in the 1911 Isle of Man TT.

The model acquired a reputation for toughness and reliability. The marque's clientele sang the praises of their machines, while maintaining a healthy rivalry with Harley owners! The Chief was one of the fastest US production bikes, with a top speed around 90 mph available from the 1200cc engine introduced in 1923. The line peaked in the mighty 1946 Indian Chief, with its heavily-skirted fenders and plunger rear suspension Â– this was truly the stuff of which legends are made! The Chief was the ideal touring machine for the wide open spaces of the US. It was the backbone of the Wigwam's range right into the 1950s. But Indian's fortunes faded after WWII, and troubles with the 1948 Arrow and Scout ranges, launched to counter European imports, hastened its end. A couple of prototypes for possible new Indian V-twins were built by Vincent in the 1950s, but it was too late. There have been several attempts to revive the marque, the latest rumored as recently as 1993.

The Indian Chief was the main rival of the Harley-Davidson in its day, which lasted from the 1920s right into the 1950s.