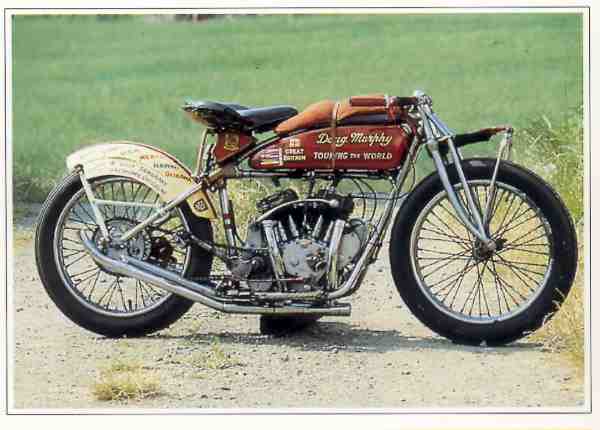 Defying the law of gravity

This veteran bike enjoyed a long career on the spectacular "Wall of Death" fairground attraction, where it appeared on every continent ridden by the Briton Doug Murphy until his retirement, at the age of 68 in 1982.

Wall of Death riders perform death-defying stunts while using centrifugal force to ride horizontally round the interior of a gigantic cylinder of wooden planks. The difficulties lay in making the transition from vertical to horizontal mode and maintaining the correct speed to overcome the force of gravity without flying out of the top of the cylinder!

Despite its great age, the Indian Scout has long been a favorite with Wall of Death riders for its legendary reliability and its modest weight, and Doug Murphy was no exception. The Scout's engine, designed by Charles Franklin, was advanced in concept Â– the sturdy side-valve V-twin drove the integral three-speed gearbox through helical gears housed in an aluminum casing, eliminating the need for a primary transmission chain and reducing maintenance to a minimum. As a concession to showmanship, the frame was chromed but was otherwise pure Indian Scout right down to the leaf-sprung trailing-link forks. The first Scouts went on the market in 1920, and the Scout V-twin survived, with various updates (the engine capacity increased from 596 to 744cc over the years), until after WWII, when the name was reused for a far less impressive parallel-twin.

This 596cc Indian Scout spent many years circling the Wall of Death all over the world before its retirement in 1982.