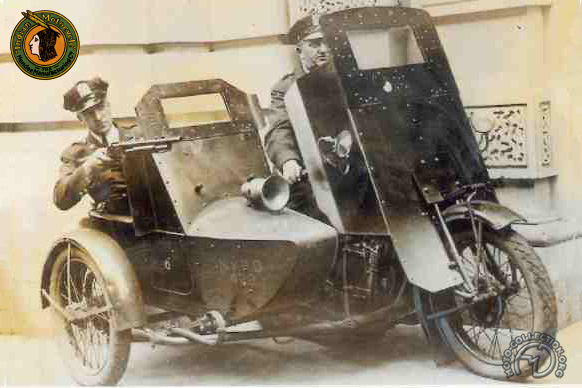 It was during the era of Baby Face Nelson and Machine Gun Kelly that the New York Police Department unveiled their latest weapon against organized crime, an armored Indian Big Chief sidecar outfit complete with bulletproof windshields for rider and passenger.

A siren, spotlight and hand-held, pump-action shotgun constituted the remainder of the arsenal, but it had to be admitted that the armored Indian had little effect and photographs of it are accordingly rare. It was, in any case, already aging when it was converted Â– the few visible parts of the machine indicate that it was a 1928 Chief.

The engine of the Indian Chief was a robust V-twin with fixed cylinder heads and large side valves. It had roller-bearing big ends, and the total-loss oil system was supplied by a mechanical pump, with an auxiliary hand pump to provide extra oil when in high-speed pursuit of gangsters (oil consumption was a thirsty 1.4 gallons every 1000 miles). Primary transmission was by three large pinions running in an oil bath, and the clutch was virtually indestructible, a serious sales point when supplying motorcycles to the police. Indian even tried to sell its "Police Chief" in England in the early 1930s: A thief-proof lock formed part of the standard specification.

Complete with Clymer spotlight and armored peephole below the rider's windshield, the NYPD's armored Indian was all set to defend the law.