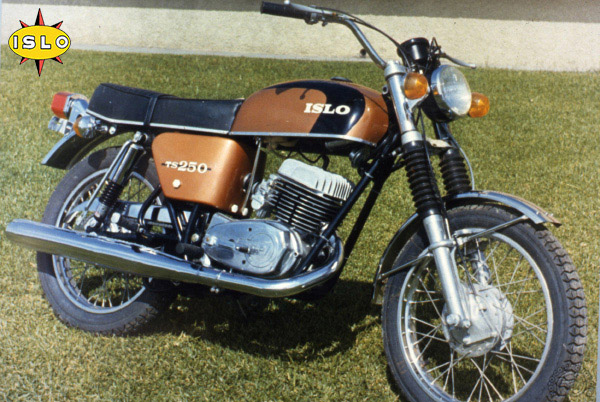 Mexico may not have a long history of motorcycle production, but the fact is that the industry is very much alive south of the border. This is proved by the Carabella and the 1973 250 Islo, which was the flagship model of a range consisting of 50, 125 and

200cc motorcycles as well as scooters. Islo is a family-run business, taking its appellation from the name of its Mexican boss, Isidoro Lopez, who founded the firm in 1925 to make kitchen utensils.

Over the years, the company has set up seven separate divisions, each run by a son or a relative. In 1956, this little industrial empire branched out into motorcycle construction under the direction of Javier Lopez. At that period, engines were imported from Italy. After five years, production was up to 1200 machines a month, basically small-displacement bikes powered by 50cc Franco Morini or 175 Mival Italian engines, now built under license.

Subsequently, Islo acquired the license for the German Sachs engines from 48 to 248cc, which, over the years, became personalized by the Mexican manufacturer. The TS 250 was highly conventional Â– even a bit outdated Â– for a machine built in 1973. It was a bike designed principally for the domestic market (to which it was well suited), though the Trial 200 4V and Cross 250 5V were exported to the US, where they were sold as "Coopers," taking the name of the marque's American importer.

Islo has never made anything other than two-strokes Â– this TS 250 was the top of the range in 1973.