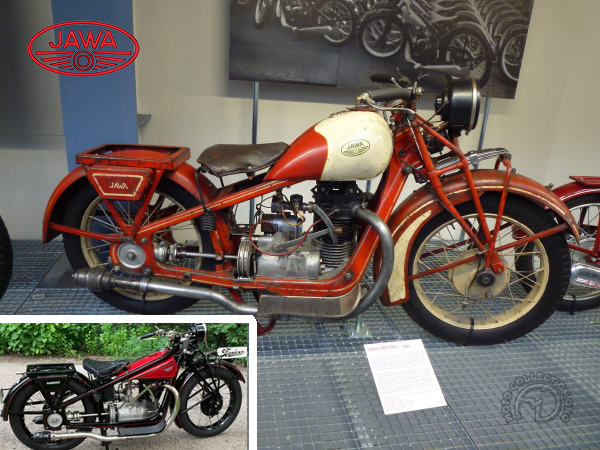 In the 1920's, the arms trade was in a downturn and the Prague company of Frantisek Janecek was suffering from the crisis. Diversification was imperative, and Janecek turned to motorcycle manufacture. In 1929, after assessing various models like the Puch and the Schliha, he decided on the 500 Wanderer, launched two years earlier.

By acquiring the manufacturing license and production tooling for this model, Janecek got Wanderer out of an embarrassing situation, because Wanderer tended to follow his heart rather than his head. The fine looking Jawa was an expensive, modern and technically advanced flagship model, but its concept was flawed. Intended as a competitor for BMW, it sold so badly that Wanderer abandoned motorcycle production.

The frame was prone to break at the steering head. Lubrication, transmission and distribution were capable of improvement; and it was overweight. It didn't take long for Janecek to realize his mistake. Happily, his company was sound, and set to work turning this ill-conceived motorcycle into a reliable machine. Eventually, 1,016 examples of this first Jawa were built, before being replaced with more accessible models in 1932. These

second-generation Jawas, powered by English Villiers engines, were soundly designed by George William Patchett, who had arrived to save the day in 1930. They set the marque off on the right foot, obliterating the trace of that first false step.

A technically flawed German design, the first Jawa 500 was cheetjully elbowed aside by more viable models created by a British engineer.